One fundamental principle of the Iron Thumb method is accentuating the negative-portion or the eccentric part of an exercise movement. Why I do that is because according to experience, well. . IT WORKS!! It is as painful as hell yes, but nothing works quite like it. But now science is giving some light as to why and how is it so together with some extra useful details:

A team of researchers led by Jarrod A. Call conducted a four part experiment using mice specifically trying to find out the effects of eccentric contraction exposure to dystrophic muscle fibers, comparing it at the same time to normal muscle fibers.

BTW: This is Important:

Dystrophic muscles by the way are caused a genetic aberration wherein there is constant muscle weakness and damage.

They did this in fact because it is well known within the scientific community that eccentric contractions lead to a great degree of micro-tears and they would like to find out if this would make the disease process worsen.

But what they found out would baffle most people; as in the experiment, it indicated that dystrophic muscles did incur some damage but the muscular fibers adapted and recovered in a matter of few days:

Another point that they made in the experiment is that dystrophic muscles recover more quickly than normal muscular fibers:

Later on in the discussion they have stated that the reason being is because the dystrophic muscles were already exposed to damage in the first place therefore their reparatory process has already been advanced and adapted accordingly: like how more money breeds more money.

In reference to bout 1, normal, healthy muscle has minimal ongoing regeneration, which is in contrast to dystrophic muscle, which undergoes continual injury and repair. These different basal levels of regeneration may explain the relative slow response to initial injury in wild-type mice compared with the faster response in mdx mice. In other words, dystrophic muscle rapidly regains contractile function due to regenerative processes already being in an elevated state.

But it was indicated later on that the earlier recovery of muscle function occurs in normal muscle but only after repeated bouts of injury.

–          Bouts of eccentric contraction really damage the muscles to a higher degree but later on they will adapt by making themselves thicker and stronger: meaner and bader; up till the point when you won’t even recognize them.  -“oh biceps! Is that you?!”

So what do we do about lifting? Eccentric overload!! But keep in mind that you need to consume more quality meals and more protein as this kind of training goes on. Also take enough sleep.  Just keep in mind from now on that the eccentric portion/negative/downward (not always see: lat pull down) of a movement bears more significance therefore requires more exaggeration and attention on your part to harvest all that it has to offer.

–          More training increases recovery capacity; therefore what you must do is keep on training and training to keep your body reved-up. This is specially so for beginners; because you may not be getting much progress on your first week but as the weeks of training turn into months; you will notice that your muscles are evolving to better fit themselves for the job: being meaner and bolder, and that is because of the increased capacity for muscle recovery after the long exposure to eccentric-overload training.

Guys, work hard remeber the notes above because FYI after a few weeks, the experimental rats became like this: 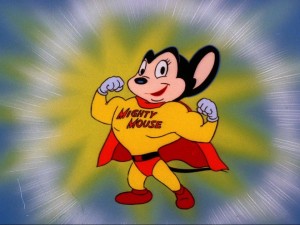 17 thoughts on “Why About Lifting Advocates Negatives or Eccentric Training”