If your goal is getting bigger, fuller muscles; the most important thing to consider is achieving muscle failure and time under tension.

One more thing: If you have read one of those BuLLS¡t articles that tell you “oh, you shouldn’t reach for failure because blah,blah, blah becuase if you reach for failure your balls will go out of your mouth, etc” read on to know why I called them BS and why those people are either idiots or are simply misleading you away from growth.

We have talked about this in our comprehensive post about why eccentric accentuated reps will give you greater muscle gains – since the tension that eccentric contraction gives off more micro-tears to your muscle which your muscle would tend to over-compensate by building larger fibers ONLY after given sufficient time for repair and recovery off course.

Today we have a couple of studies to help us prove our point. Here’s one of them entitled

A single bout of resistance exercise stimulates the synthesis of new muscle proteins. Chronic performance of resistance exercise (i.e. weight training) is what makes your muscles grow bigger; a process known as hypertrophy. However, it is unknown if increasing the time that muscle is under tension will lead to greater increases in muscle protein synthesis. We report that leg extension exercise at 30% of the best effort (which is a load that is comparatively light), with a slow lifting movement (6 s up and 6 s down) performed to fatigue produces greater increases in rates of muscle protein synthesis than the same movement performed rapidly (1 s up and 1 s down). These results suggest that the time the muscle is under tension during exercise may be important in optimizing muscle growth; this understanding enables us to better prescribe exercise to those wishing to build bigger muscles and/or to prevent muscle loss that occurs with ageing or disease.

It is important to point out that this study used weight-trained participants knowing this we can rest assured that the results of this study can of much significance to you as a bodybuilder:

Eight recreationally resistance-trained men (23.5 ± 1 years (sem); 88.3 ± 5 kg; BMI = 26.5 ± 1.0 kg m−2) were recruited for the study. Participants were habitually active and engaged in lower body resistance exercise at least 2 times per week for ≥2 years at the time of the study. All participants were deemed healthy based on their response to a routine medical screening questionnaire. We chose to recruit resistance-trained subjects to increase the reliability of our strength measurements and to eliminate the potential for non-specific muscle protein synthetic responses due to the novelty of a resistance exercise stimulus.

But take note that they also measured the muscle recovery and noted that significant improvements were made at a cellular level with the “Time under tension group”. This further proves that gains from maximizing time under tension during your reps will yield permanent results which is beyond that of a mere “pump”: Keep in mind achieving a “pump” feels good but that is not an indicator of growth or progress at all.

The only thing that would be missing from that study is that there is no comparison towards reps done with heavier weights. But that is so because the only goal of the researchers was to prove that hypertrophy can be achieved using lower weights (What more with heavy weights). And they did this research under the knowledge that high intensity resistance exercise is an effective stimulus to increase muscle protein synthesis rate (Chesley et al. 1992; Phillips et al. 1997; Kumar et al. 2009).

Note: I can now see why doing slow reps with heavier weights (like what is done with our Ironthumb protocol) give great gains not only in size but also in strength.

With that in mind let us take a look at this study:

We have reported that the acute post-exercise increases in muscle protein synthesis rates, with differing nutritional support, are predictive of longer-term training-induced muscle hypertrophy. Here, we aimed to test whether the same was true with acute exercise-mediated changes in muscle protein synthesis. Eighteen men (21±1 yr, 22.6±2.1 kg∙m-2 means±SE) had their legs randomly assigned to two of three training conditions that differed in contraction intensity (% of maximal strength [1RM]) or contraction volume (1 or 3 sets of repetitions): 30%-3, 80%-1 and, 80%-3. Subjects trained each leg with their assigned regime for a period of 10wk, 3 times/wk. We made pre- and post-training measures of strength, muscle volume by magnetic resonance (MR) scans, as well as pre- and post-training biopsies of the vastus lateralis, and a single post-exercise (1h) biopsy following the first bout of exercise, to measure signalling proteins. Training-induced increases in MR-measured muscle volume were significant (P<0.01), with no difference between groups: 30%-3 = 6.8±1.8%, 80%-1 = 3.2±0.8%, and 80%-3= 7.2±1.9%, P=0.18. Isotonic maximal strength gains were not different between 80%-1 and 80%-3, but were greater than 30% -3 (P=0.04), whereas training-induced isometric strength gains were significant but not different between conditions (P =0.92). Biopsies taken 1h following the initial resistance exercise bout showed increased phosphorylation (P<0.05) of p70S6K only in the 80%-1 and 80%-3 conditions. There was no correlation between phosphorylation of any signalling protein and hypertrophy. In accordance with our previous acute measurements of muscle protein synthetic rates a lower load lifted to failure resulted in similar hypertrophy as a heavy load lifted to failure.

We can clearly see in this thesis that light weights taken to failure caused pretty much the same level of hypertrophy as doing the same thing with heavier weights. The only limitation of this research is that the subjects were non-practitioners (non-lifters). But seeing that the two groups (heavy and light group) differed on the nature of their gains (strength wise) we can tell that there is validity to their results.

UPDATE: Here’s a similar study BUT this one used EXPERIENCED practitioners

It is also important to point out that people who took heavy weights to failure experienced higher strength gains along with the hypertrophy they experienced:

Although relative training load did not impact the magnitude of the hypertrophic response, it did have a clear impact on voluntary isotonic strength gains. Both the 80%-1 and 80%-3 conditions demonstrated a larger increase in 1RM strength compared to the 30%-3 group. These results suggest that practice with a heavy relative load is necessary to maximize gains in 1RM strength of the trained movement. These observations are in line with previous work which has shown that strength gains are specific to the movement that is trained (30) and strength gains are due to a combination of muscle hypertrophy and neural adaptations (32). It should be noted, however, that similar gains in MVC strength, maximal instantaneous power output, and rate of force development were seen across all three training conditions. These data show that hypertrophy is generally beneficial to all strength and power tests that engage the larger muscle. However, it appears that neural adaptations are largely specific to the movement and load used in training (32)

Get the best of both worlds:

The results of these two studies are completely in line with our “Ironthumb” protocol:

1) Train with weights you can handle from 6-10 reps

Actually our exercises would fall close to the 80%1RM to failure group. I would recommend that you reap the hypertrophic and strength benefits of using 80% of your 1RM (or at least weights you can only do for 6 or eight reps) and bring them to failure or beyond failure (for intermediate lifters only) by doing rest-pauses, drop sets (drop until you drop!), forced reps (with your partner assisting you only with the positive part of the failing rep), inflitonics, or omni contractions. 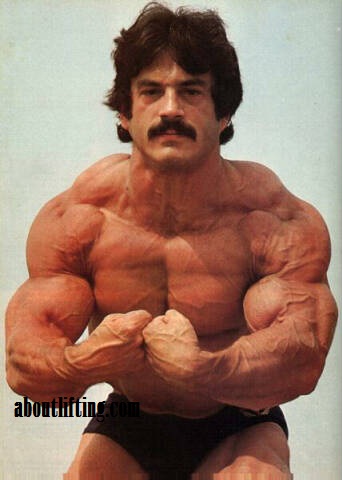 That goes without saying that if you are going to use those “beyond failure” techniques mentioned above then you won’t need to take 3 sets to failure. Just take some 1 or 2 warm up sets (not taken to failure – only to warm you up OH and don’t stretch the muscle you are about to exercise) then on with your “beyond failure” set! Give it all you got since that is only one set, no need to hold back. And I would recommend you not do anything further for the muscle group you just HITed. More or less just do another 3 regular sets of an isolation move and other moves for another angle or the body part (for back) and you are good to go for that day.

For beginners I would need you to just take the 3 sets to failure – nothing fancy at this point then go on to apply those HIT beyond failure moves after 5 months of continuous training or until you can deadlift your own body weight for 10 clean reps; assuming you are not morbidly obese – if so you cannot use the dead lift as a basis.

Let me ask you: Do you usually take your reps to failure? Eat your eggs, people!

Specialize your Training and Lifts According to Your Goals - The Wisdom of Mike Mentzer
Is Following The Leviticus, Noahide or Kosher Diet Good For Lifting and Muscle Gain