Lifting weights have been proven by science to be good for your bones. In a research done in 2011 they found that 24 weeks of lifting weights has significantly increased bone mineral density in healthy young men.

Changes in Bone Mineral Density in Response to 24 Weeks of Resistance Training in College-Age Men and Women:

Almstedt, HC, Canepa, JA, Ramirez, DA, and Shoepe, TC. Changes in bone mineral density in response to 24 weeks of resistance training in college-age men and women. J Strength Cond Res 25(4): 1098-1103, 2011-Osteoporosis is a chronic disease of major public health concern. Characterized by low bone mass and increasing risk for fracture, osteoporosis occurs to a greater extent in women. Resistance training is a mode of exercise that can be used to build peak bone mass during youth, thereby preventing osteoporosis later in life. Our aim was to evaluate the effectiveness of a resistance training protocol designed to apply loads to the hip and spine in men and women. We recruited recreationally active men (n = 12) and women (n = 12), ages of 18-23. An additional 10 participants (5 men, 5 women) served as controls. Volunteers completed questionnaires to assess health history, physical activity, dietary intake, and menstrual history. The training program was performed for 24 weeks, on 3 nonconsecutive days per week, including exercises for the upper, lower, and core musculature, marked by an undulating periodization varying between 67 and 95% of 1 repetition maximum (1RM) on the multijoint exercises of bench press, squats, and deadlifts. Dual energy X-ray absorptiometry (Hologic Explorer, Waltham, MA, USA) was used to assess bone mineral density (BMD, g•cm−2). A 2-tailed analysis of covariance, controlling for body mass index, revealed that in comparison to women, men had significantly greater increases in BMD at the lateral spine and femoral neck. Male exercisers were found to increase BMD by 2.7-7.7%, whereas percent change in women ranged from −0.8 to 1.5%, depending on the bone site. Both male and female controls demonstrated about 1% change at any bone site. Results indicate that 24 weeks of resistance training, including squat and deadlift exercises, is effective in increasing BMD in young healthy men. Similar benefits were not derived by women who followed the same protocol.

Results indicate that 24 weeks of resistance training, including squat and deadlift exercises, is effective in increasing BMD in young healthy men. Similar benefits were not derived by women who followed the same protocol.

The only sad thing is that the female respondents did not reap the same benefits that the men did in this study but then again we all know that men genetically adapt faster to physical stress than women so it might just take them longer than 24 weeks to respond but since I know that most of you guys are “dudes” then you should be celebrating.

Lifting was certainly good for Lamar Gant’s bones (even if he has scoliosis): 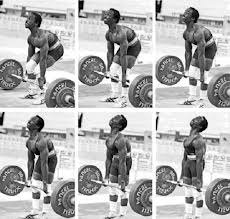 We have also cited a research before that has shown that lifting does increase bone density but that was done on mice – and they made the mice SQUAT!

So if anyone tells you that deadlifting or squatting is bad for your bones you can tell them to jack off. Any workout can be bad for you if you don’t do it right, it’s not the lift’s fault it’s the LIFTER’S fault. Even the scoliotic Lamar Gant can deadlift 600 lbs and if you ask me I think lifting is serving his bones well. Eat your eggs, people!