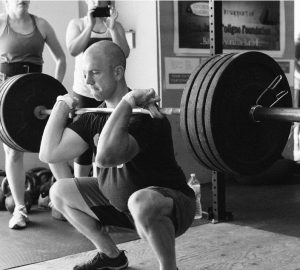 But that’s not entirely true. It’s time to meet “powerbuilding”. Maybe you’ve heard of it already, and maybe you’ve even tried it. If so, good for you. If not, you’re definitely missing out. Because powerbuilding, or power-bodybuilding as the great Mike O’Hearn calls it, truly is the best of both worlds, and it’s becoming an increasingly popular way to train. So, how does it work?

Well, understanding powerbuilding starts with a basic understanding of what makes powerlifting and bodybuilding so effective for their separate goals. In powerlifting, we stay in a low rep range to lift at or near our max weight. Training with these heavier loads causes myofibrillar hypertrophy, or growth in the contractile proteins, and lead to an increase in muscle density. This muscle density is what leads to greater strength. Greater strength allows powerlifters to lift increasingly heavy weights, and so the cycle continues.

Back at my website (www.BuildingYouBetter.com), I talk a lot about training like a hero. I believe in preparing for real-world situations, and training for function rather than aesthetics. With that said, you probably think I fall squarely in the powerlifting camp. But apart from being a Hero In Training, I’m also human – and although performance is important, we all want to look our best. So, what if someone could have both? What if you could train for both strength and size? Well, that’s where powerbuilding comes in.

Powerbuilding at its simplest utilizes elements of both powerlifting and bodybuilding for maximum results. And the two styles actually blend better than you might think. Lifting heavy weights not only leads to growth in the contractile proteins and increase in muscle density, it also activates the body’s nervous and endocrine systems to allow your body to handle greater levels of stress. Basically, heavy lifting primes your body for hypertrophy – myofibrillar and sarcoplasmic. This means that employing powerlifting-style sets early in your workout will allow you to benefit more from bodybuilding sets later in the workout than if you’d just done the bodybuilding sets alone.

Another option is to do two workouts a day, powerlifting first and then bodybuilding later in the day. Much as I would like to get in two gym sessions a day, that isn’t always practical, which is why I usually fit both training styles into one workout. If you have the time, though, you could certainly give the second option a try. Some lifters have even had great success doing powerlifting training early in the week and bodybuilding later. If you want to incorporate powerbuilding into your training regimen, I recommend you start by putting both styles to work in the each workout. After that, you can experiment and see what works best for you.

With that said, I’m going to leave you with an example of a powerbuilding workout. This is a typical powerbuilding chest workout for me:

Flat dumbbell flyes: 3 sets of 12 reps. If I have anything left at this point, I simply do pushups to failure.

As you can see in the example, the number of reps per set gradually increases from more of a powerlifting range to a more traditional bodybuilding style. At the same time, the number of sets decreases to make the workload easier to get through. You can use this same format for your other muscle groups. And, if you enjoyed this article, you can subscribe for even more great content from Aboutlifting. Also, be sure to check out my website, at www.BuildingYouBetter.com for more information on how you can train like a hero.