I train on a lot of places on a 2 mile radius from home. Last Wednesday I trained at a gym called Ultimate Factor Gym. It’s a great place and not something that you would call a “corporate gym”. The place was decent with complete sets of equipment for all your basic free weight lifts plus a good squat rack and some hammer machines; the rate is cheap and there are hardcore bodybuilding posters all over the place – which screams “serious” training instead of the “fitness club” of which corporate gyms ooze from every pore.

UFG is situated in the second floor of a 2 storey compound and the hallway and there is a long hallway where you would walk to the facility’s entrance to where the fresh semi-country breeze have no choice but to pass through comforting anyone walking right by like automatic air-conditioning.

That day I took my girl for her basic whole body workout. I gave her a good 30 minute session with all the basic moves like squats and deads then some machine drop-sets and some cardio of her choice before and after the weights. I gave her a good workout not bad for a free service (I should have probably charged her).  I had to cut the session to the 45 minute mark since she needed to take out daughter to her private tutorials. They kissed me goodbye thus I began my own session. Time for some love!

I started with some heavy 3 RM deadlifts which fired me up. I worked the weight up to 20 reps total which was great and really grind my teeth through each and every reps. I even needed to shed a total of 4 small supplementary plates for my last 6 reps.

I was about to just use that as an opening act for the day’s semi whole body workout day. But after a few minutes I felt that familiar feeling of light-headedness and syncope (medical term for blacking out). 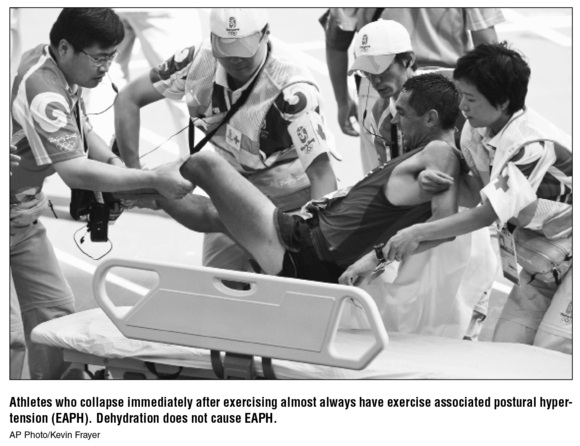 (Image source) well but I wasn’t exactly like that
Actually I was already having some light headedness during my last couple of reps of deadlifts. But off course I pushed through but reduced the weight a little – which is why I shed four small plates. Good thing there were hardly anybody in the gym that afternoon (which is actually NOT a good thing after all) and the hallway was empty.

I went to the comfort room which was just straight ahead and I tried to induce a vomit to see if it will help. I was only able to puke out a teeny amount and it didn’t help much.  As I went out of the men’s room the light-headed feeling just got worse and I was actually feeling like I am starting to black out. I sat in the corner of the hall way close to the entrance of the gym. I didn’t worry much since nobody was around to witness that I was passing out. I sat on the corner of the mild elevation just before the gym entrance (there was really no “actual” door there) trying to act normal and trying to act like I was just trying to relax. The cool, clean breeze of the hallway helped me relax, that I must say – that certainly wasn’t bad.

Guess what: I really did pass out. I regained consciousness with my upper body literally lying on the ground upon the elevated part of the floor – didn’t know how that got there. Damn, if you didn’t know that I was lifting, you would think I was a drunkard who passed out.

Still light headed I heard the caretaker/ trainer checking on me “you okay, man?” I nodded and said “yeah”, “I just need some sugar” then I asked for a candy, luckily they sell candies too.

After a few minutes the light headedness started to wane but still there. I am not about to leave just like that, though! I prepared my workout protein shake then I finished some couple of two set high rep shoulder and bicep work taking sips of protein in between lifts as I try to regain energy. I tried to do some alternating one hand chins but I was still so weak.

After that I finished off my post workout shake and sat in the airy balcony for a while before leaving recollecting the reasons why this happened. The main reasons why I fainted in this workout are below:

Long layoff – I was only out of the gym for 2 weeks and this happens! Like what we discussed in the first fainting post, your power remains constant but your work capacity suffers even if you have only been out of the gym for a short while. The result is that you will be pushing your energy reserves to the max with your intensity as your work capacity cannot take it – leading to you passing out.

Hypoglycemia – This certainly would not happen have I not done those heavy deadlifts. And science proves that heavy, compound, high CNS lifts (deadlifts, squats, etc) eat up more glycogen stores since they involve firing several muscle groups at once for short bursts of energy while single joint moves like leg extensions would only tax your free fatty deposits and not so much of your muscle glycogen stores. Heck that would really cause hypoglycemia as deadlifts will suck out all of the sugar stores in your muscles. Even heavy benches cannot match deadlifts in terms of glycogen demand and never leads one passing out like that.

Simple sugars and too much coffee before training – It also didn’t help that I took several cups of coffee and lots of simple sugar junk foods at home. That lead to a bad combination where the caffeine induced a temporary “high” eating up a chunk of my glycogen stores and the simple carbs from junk food messing up my insulin levels which is not a good thing especially if I was planning to train high intensity later the day – which I was!

Now all those reason plus maybe some other stuff that I haven’t though off have played a great role in me passing out. I hope you readers will use these as a lesson so that you can avoid this dangerous situation as much as possible. Remember if this happens to you at any point, even if you think you don’t need to – get yourself checked by your doctor the day after just to be safe. Who knows, you might have some underlying medical condition that you don’t know off. Luckily I don’t.

Now, do I regret having that training session? If you think about it I wasn’t able to complete the “pumping” phase of the workout, but I was able to complete the deadlift portion which is the most important part of the session! That deadlift part is where the growth was stimulated and where the strength and muscle gains will come from. That was sure a kick ass day and deadlifts surely kicked my ass! Eat your eggs, people!

Take Control of your Own Testosterone – It CAN and WILL get You in Trouble
Squats, Deadlifts, and Ergo Free Weight Lifts Produce More Testosterone