I think I may be genetic. No really – I have like less than 7 percent body fat the last time I checked and it seems like a week or two of weight training has always been and still is enough to get me back into shape. Or is it just because I know how to stimulate my muscles and force them into growth? Perhaps it is just because I have gained that level of mastery of the ways of the iron that building muscle becomes a walk in the park for me (a very sore walk in the park so to speak). Perhaps I would never know.

But one thing is for sure; genetic freaks exist. Besides the lucky ones who have naturally higher testosterone levels and metabolism; thus allowing them to eat more and build muscle instead of fat – there are also those freaks whose gift lies in their DNA, specifically in their myostatin.

Now what the fudge is a myostatin? Myostatin is a protein that blocks or inhibits muscle growth:

Animals lacking myostatin or animals treated with substances that block the activity of myostatin have significantly larger muscles. This could be of economic benefit to the livestock industry. However these animals require special care and feeding which offsets the potential economic advantage.

Mutations in both copies of the human myostatin gene results in individuals that have significantly more muscle mass and hence are considerably stronger than normal. Furthermore blocking the activity of myostatin may have therapeutic application in treating muscle wasting diseases such as muscular dystrophy.

Apparently evolution has given us myostatin to keep muscle growth at bay. Since we all know that having tons of muscle also leads to tons of appetite and not to mention the immense caloric requirements just to maintain them – HECK!! Take a look at how pros like Coleman, Kai, Sylvio, etc; their grocery purchases would be enough to feed an entire third world country! And you: since you have been bodybuilding haven’t you experience a sudden surge in your appetite?

Simply put a muscle is a very expensive commodity which is the reason why muscle building through weight lifting is by far the most superior method of fat loss (not endurance cardio). And that is the same reason why nature has not intended us to build too much muscle since that would hinder the general survival rate of the whole species and that is where myostatin comes into play.

We have motioned before about the “freak” Colem-animals above in the wiki definition; apparently there are some animals that were naturally born with zero myostatin like this Belgian blue calf below: 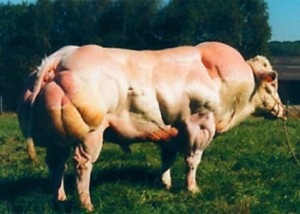 MAN I think she’s on Steroids! I bet this cow goes to Metroflex every week and does sets with Johnnie Jackson!

Apparently some animals are born without Myostatin like that cow and Wendy below: 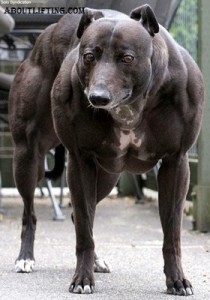 And scientists have produced “mighty mice” in the labs whose Myostatins have been suppressed. They have even though about producing live stocks like these but apparently these freaks just eat too damn much that the benefit of their massive meat is outweighed by their cost – so for those man-eating aliens it’s not a good idea to keep too many bodybuilders in the herd just for them to know.

So we do have this myostatin that keeps our muscle growth at bay for survival purposes but like what we mentioned once in a while some lucky bastard is born with naturally deficient myostatin. This might be a natural error (or a mutation) or simply an adaptation – perhaps their ancestors needed extra muscle to survive. Take this German super baby for example: 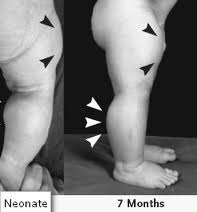 The boy’s mutant DNA segment was found to block production of a protein called myostatin that limits muscle growth. The news comes seven years after researchers at Johns Hopkins University in Baltimore created buff “mighty mice” by “turning off” the gene that directs cells to produce myostatin.

And yes, it runs in their blood:

Researchers would not disclose the German boy’s identity but said he was born to a somewhat muscular mother, a 24-year-old former professional sprinter. Her brother and three other close male relatives all were unusually strong, with one of them a construction worker able to unload heavy curbstones by hand.

In the mother, one copy of the gene is mutated and the other is normal; the boy has two mutated copies. One almost definitely came from his father, but no information about him has been disclosed. The mutation is very rare in people.

Some may say that genetic freaks don’t exist – well I hope it’s now clear that YES they do. And now we have proved that there a number of factors that contribute or cause one to naturally be predisposed build more muscle than the rest:

3) Testosterone level and now we can add:

One point I would like to make here in this post – is that this is the reason why the seven commandments (grand daddy principles) doesn’t have a required recovery period set in stone. Some people will just have different recovery requirements and those factors above each play their own role at each and every one of us at different rates for each one of us.

Some people might build muscle at twice per week training per body part but at the same time would not be able to maximize growth at longer rest periods (or might even lose progress). When you see people in your gym getting more muscle than you do don’t feel bad – they probably enjoy some of the factors mentioned above. In fact you, yourself (who you consider to be a hard gainer) might even posses one of the advantages above and all your muscles need is just some scientific kick in ass with the Ironthumb method – our template which is designed to maximize your gains up to your genetic potential.

Most of the time people who complain that they are hardgainers simply aren’t training right (either they under or over train or they just throw the weights around mindlessly for example) or are just not eating right. A simple modification in their regimen usually gets them improving in no time.

Be smart; train smart if you are a hard gainer, read our posts (you can start here) and read some scientific researches here. Remember you need the most WISDOM that you can get if you are not a genetic freak that also means that you need to take the grand daddy principle by heart READ THAT HERE (warning: THAT ONE IS IMPORTANT!).

And For Godsakes; don’t ever make the fact that you are not GENETIC as an excuse for mediocrity – work hard and work smart! On the other hand if you are one of the Genetically gifted freaks out there, don’t make that as an excuse not to train hard and scientifically – no matter how good you are you must always strive to be the best that you can be and yes you can become better and being genetically gifted just offers you a chance to become one of the best. Millions would kill to be in your position so don’t waste it.

Don’t ever make the fact that you are not GENETIC as an excuse for mediocrity on the other hand if you are one of the genetically gifted freaks out there, don’t make that as an excuse not to train hard and scientifically.

Share your thoughts: Do you know anybody who you can consider a genetic freak? Can you tell us about them? Or Do you think you are a genetic person or a hard gainer and why? Eat your eggs, people!

5 thoughts on “Myostatins and Do Genetic Freaks Exist”