Several studies show that music indeed helps plants grow. The thing is if music helps these brainless creatures grow – then it would make much more sense to say that it will also help you grow. Therefore you must listen to music when you lift weights and train.

I have come across this page filled with studies conducted to assess whether music helps plants grow. The results have been positive. Here are some of the cited studies below:

In her pathbreaking book, The Sound of Music and Plants, Dorothy Retallack penned down her research. For her laboratory experiment in her studies for the degree in music she chose to study the effects of music in plants. Through rigorous studies and lots of observation, she concluded that plants grew abundantly in classical music as compared to rock and roll. Strangely, when the genre of jazz was played, some plants leaned towards the speaker whereas some leaned away from it. After further research, Retallack discerned that the genre of music did not have anything to do with the response; it was the kind of instruments used and their resonance that probably made the difference. Her book says that loud frequencies of music played havoc with the health of the plants, resulting in a very slow and stunted growth; even death in some cases.

Joel Sternheimer studied and investigated the vibrational frequencies of amino acids. Ribosomes plays an important role in the creation of proteins from a variety of twenty amino acids depending on the need of the cell and its organisms. While this process takes place within the ribosomes, the amino acids turn comparatively slow, making it possible for the researchers to measure their individual frequencies as a “note.” When the frequencies are recognized, each of these notes can then be recorded into a sequence, or melody. Sternheiner successfully replicated the recorded melodies for the selected proteins. When these melodies were played, he noticed that it increased the manifestation of the corresponding protein and accelerated the growth of the plant. Sternheiner affirms that tomatoes grew two and a half times larger when his melodies were played to them.

The above-stated experiments prove that music does affect plants. But it is not the lyrics of the songs, or their meaning, it is the frequencies and the vibrations that they emit, which make the difference. The study by Dorothy Retallack goes to prove that loud music can ruin the mood and health of a plant. Soft music with lower frequencies is better for their growth and blossom. Although many claim that the experiments conducted by Retallack were unprofessional — making the results unworthy — these experiments have shed a lot of light on the way plants react to various frequencies.

In summary; even plants react positively to music but at a very basic level (of being sensitive to its frequencies and vibrations). 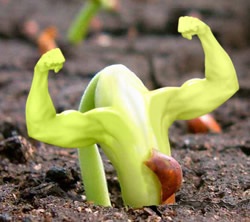 That’s one muscular plant right there!

Humans on the other hand, react to music at an emotional and psychological level so it makes more sense to use music for nurturing humans by using it to aid our psyche on many areas of life including “lifting”.

According to my experience listening to music really aids in going all out in the gym – especially when you train high intensity there is really no reason to not take advantage of the psychological effects of music of allowing you to push further. Music helps drive your CNS to the max and is as strong a stimulant as coffee and therefore be a lot of help especially for strength athletes going through their heavy triples.

When is listening to music bad?

Some say that listening to music distracts you from your workout – Bull Sh¡t!! Music fires you up and since workouts must be your meditation you need all the help you can get to stimulate that inner hurricane inside you (intense but peaceful in the core) and music does a perfect job doing that.

I say the only time music can be bad is if the music is bad. Is music bad just because you don’t like it? INDEED! Rock music is generally well accepted as a great workout tool for hardcore lifters but off course not everyone likes rock so for some listening to rock while lifting might set their intensity off and make them loose motivation.

On my end what I hate about globo gym branches is the techno-aero-funk type music (I don’t even know what they call that thing) that keeps on playing on the background which really sets me off. Although I understand that golf-car driving gym moms would enjoy working to the beat of “that thing”.

If that is the case with you and your gym doesn’t play the music that you like and you have pretty much no other choice – then you just need to make yourself deft to everything around you by using the “empty mind practice” that we talked about.

You can also plug in your Ipad, or walkman or whatever but personally I don’t prefer lifting with a foreign object stuck into my ear – I just cannot do that! But I think most people would have no problem with that so go for it.

In lifting weights whatever your end goal is- increased capacity and increased training intensity will always yield greater results. Therefore listen to whatever type of music that fires you up be it rap, rock, Classic if you’re hardcore (or even Britney Spears if that’s your thing!) and just watch your intensity fly through the roof.

Simple question: What type of music fires you up? Share it below in the comments section. Eat your eggs, people!