It’s Maundy Thursday at the time of me writing this post. Now I know most of you are wondering, especially Christians and Catholics: is it feasible to follow the traditional meat abstinence protocol if you are a lifter or a bodybuilder? Will it hinder you from getting your nutritional requirements? Will it be good for health in general?

I grew up in a traditional Catholic family. Every Lenten season we abstain from eating any sort of meat for a week beginning Monday usually.  We abstain from meat but we would eat fish or sea foods and vegetables and eggs instead alongside rice. Personally I had no problem with this even when I started lifting weights since tradition allowed eating eggs – which is my main protein source.

Now my opinion on the Christian Lenten fasting protocol is that it’s ok and it doesn’t hinder life as much as other traditions go. In fact if you’ve ever been to a place colonized by Spain and follows the Lenten tradition religiously – you’ll find that this the most peaceful time of the year and most people in the neighborhood would either be out of town or relaxing at home. Crime rates are even lower generally during Lenten season in places that observe it so even though I am not big on religion – I love this whole “Lenten” thing nonetheless.

It is also in my opinion that the Christian Protocol for Holy week abstinence to be quite lax. Actually I realized that our practice back home is even stricter than the actual American Catholic guidelines since back at home we actually abstain for a whole week vs just a meal in a day on Thursday and Friday from the guideline. All in all this kind of fasting has got nothing on the Judaist fasts or to the Ramadan season – so to be honest Catholic kids really got nothing to complain of.

It won’t hurt a bodybuilder or a lifter to follow the Lenten abstinence protocol:

With that being said – it should not hurt a lifter to follow the Lenten protocol for meat abstinence. First off the protocol is quite lax to begin with and secondly it doesn’t forbid eggs, sea food, or dairy. A bodybuilder carefully counting his protein can easily supplement with whey protein at times like this (with whey I recommend Gold Standard Whey – it’s both cheap and effective and all those ultra selective, price-minded lifters choose Gold Standard for that reason).

Did fasting take away Jesus’s physique? I think NOT!! 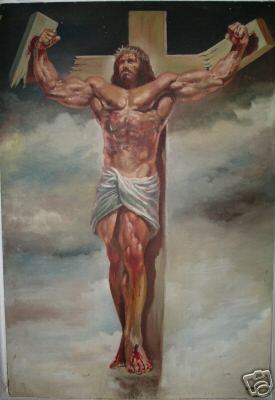 Jesus was as cool as fuck even back then and yes HE FASTED!!

Another thing worth mentioning is that this Lenten abstinence won’t really hinder lifters in their goals but it will actually help them. Yes we all agree that meat consumption is paramount to optimum nutrition but that sudden change in diet and macro-intake for a brief amount of time can positively re-boot your metabolism. Since like what we discussed earlier when you eat the same type of foods for a long time your body would tend to “get used” to it thus making your dietary regimen lose most of its desired effects.

This Lenten tradition for meat abstinence can act as some sort of a dietary shock regimen thus making your body assimilate your macros better in the future and so it will respond to your old dietary regimen like how it did when you first stated it once you get back to your normal diet again, kinda cool if you ask me.

Unfortunately two days of just abstaining one meal may not cut it to harvest any sort of meaningful dietary shock. I recommend that you take the whole week to reset your metabolism. You can make it up by lowering your intensity in your workouts for this week. Just removing the meat from your diet for just a week and focusing on other food groups that you aren’t used to instead isn’t going to kill or starve you. Again it will even be beneficial to your workout progress and on top of that it is even benefits your health just as much as it benefits your fitness progress.

At this period concentrate on fishes, broccolis, mushrooms, rice and other stuff like that. It’s only a week guys and it’s a great excuse to do a system shock regimen. You can even go hardcore and go completely vegan taking off fishes, poultry, eggs, and any sort of meat products – Earlier we talked about Timothy Bradley and how he pulls this off changing into vegan diet before his fights.

Note: Vegan diet isn’t effective for building muscle and strength. It is only good for your system to go vegan once in a while to shock it so it will assimilate meat products better.

And for me anyways the benefits of these things aren’t about religion but of reality. I don’t do this diet to get to the gates of heaven. I know that most of the things that the God of Israel commanded were for the good of man and his health. That is the same reason why he commanded several periods of Israelites to sway from their normal diets because even Moses knew the health benefits of periodic fasting and that it does the body good.

Anyways, the whole point of this Lenten season is to meditate upon our lives – therefore it makes sense to change our usual diet even for just one week to shock our system. It just feels damn good to do so. However to make the most out of this period; really put an effort to eat the stuff that you really don’t get to eat under normal circumstances. It’s now a good chance to try and eat some exotic foods, and stuff you never tried before. You should try “Maitake” mushrooms; they are great protein source and have some great health benefits as well. You can even skip on all those capsulated vitamins this week and just stock up on lots of fruits and green leafy veggies. Snack on some citrus – my 4 year old daughter loves snacking on citrus, langsats, and rambutans – you should too.

Again, you should really try to focus and stack up on foods that you haven’t tried or rarely eat and make this whole meat abstinence practice worth your while. Anyways I hope you realize that Lenten is not just about Easter bunnies but looking into your life, how you’re living it and if there is anything or any ways you have been living it that you wish to change.

BTW, do you practice Lenten traditions from where you came from? What is your experience? Please comment below. You can still eat your eggs, people – the church allows it!

A Simple Guide on What to Eat When Lifting and Trying to Lose Fat. Because People Have OVERCOMPLICATED Things! – Here’s ONE Principle to END ALL Principles
Pacquiao vs Bradley 2 And MY GOD – BRADLEY'S LATS!!

5 thoughts on “Lenten Fasting and Meat Abstinence – Does it make Sense for Weight Lifters and Bodybuilders to Follow it?”