The rise of the popularity of HIT-style regimen was a good thing: for one, lifters now know more or less that very long bouts in the gym is not really necessary if they can get the most out of each and every rep and this is by means of applying high-intensity techniques that goes into and beyond muscle failure – try the inflitonic reps, so to speak (if you DARE!).

HIT connoisseurs like Mike seem to believe that lack of results are often remedied by less frequent training and bouts under the iron – which makes sense on paper; as this will allow the body enough if not more than enough time to recover. The only problem is that for beginners there is really not much to recover from and ahrd-gainers may even benefit from training each bodypart more often BUT with shorter sessions.

I am a great fan of Mentzer as you can see the greatest programs I wrote were a mix of more traditional style of bodybuilding programs and his furiously intense techniques which we call “tools of the HIT”. These techniques are to be applied once for each body part like your inflitonics and drop sets which really get the most out of the set. 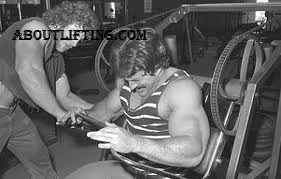 I have also followed his regimen by heart word per word before but the problem was that I wasn’t developing as fast as I should and you could’ve guessed what the problem was. YES the frequency!

You see, with that kind of frequency you would be ending up hitting the same muscle group in two weeks! At that great span of time I would have been normally been able to stimulate muscle growth for each and every body part 2 times already at least! Thus we changed it up so we can do each training sessions more often but still get the same HIT-caliber results – we therefore have the best of both worlds.

Another problem with that kind of frequency is if total beginners end up actually applying it. It would be no problem if an advanced lifter would train as seldom as HIT would advise once in a while – anyway he is already lifting huge poundage and it would really require him more time to truly recuperate from his sessions.

Beginners and more intermediate lifters DON’T have this problem; imagine recovering from an intense session from 100 pounds of weight and compare that to recovering from a session of the same amount of effort with 300 pounds? Clearly the one who is lifting 100 pounds could use stimulating his muscles with the 100 pound weight more often than the guy who is hoisting 300 pounds for the same move of the same session.

Clearly it must be established that less advanced lifters can and SHOULD lift with relatively more frequency than their advanced counterparts. I recommend a good high intensity session hitting each body part 2 times a week and can be reduced to 1 session per week as you get more advanced and recovery becomes harder because of the increasing poundage that you handle each session.

So take home lesson – we learn from many things; but we always remember the good but do away with the bad (as always). In this case HIT taught us many things and we learned many great ways to “intensify” (increase the effort) our sessions and make each session less lengthy but more intense. (also read: the relationship between sets and number of reps)

TL;DR – Train more frequently (more frequent than what HIT prescribes – with which you will default to the “regular” frequency settings of more traditional programs) but do shorter BUT more intense sessions.

Till next time, eat your eggs, people – A-Lifters!