Vince Gironda has popularized a certain move for chest which many claim to have helped them big time with their pectorals development. According to Vince Larry Scott, the first Mr. Olympia relied heavily on this move which sculpted his chest to mountains that he had atop of his chest. This exercise is basically the Wide Grip Bench Presses to the Neck, AKA the 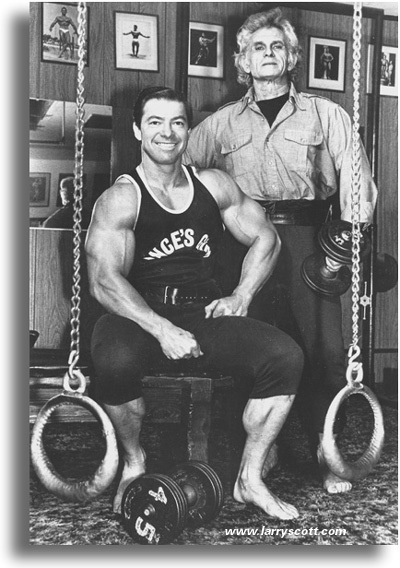 And it’s called “Guillotine” press for obvious reasons. Basically instead of the bar touching your lower nipples at the bottom of the move, it will be touching your clavicles. For that reason it is preferable to do this move on a smith machine or on a hammer chest press.

Why Does it Work:

Personally, I love incorporating guillotine press from time to time into my chest days. It tends to give my pecs a godly burn, definitely a worthy stimulus. The wide grip bench press to the neck works because it overloads the chest in its stretched out position. Since you would be using a very wide grip and flare out your arms to the point that it fully stretches your pecs all throughout the move’s range of motion. Basically it keeps the pecs under tension the whole time. And we all know that time under tension is one of the most important things for muscle growth.

The Bad:
Now, like any other lift the guillotine press would have its good and bad sides. The bad side of the guillotine press is that it would put too much strain on your shoulders – specifically on your rotator cuffs. That is because you would be flaring your arms too much.

Certainly this move is not for beginners. The guillotine press is designed as a “shock” move, meant to kick an unresponsive chest out of the rut. Beginners must be concentrating instead on basic moves for several months and strive to increase their numbers and build on their foundation which is the best and fastest way for anybody to achieve sheer mass (beginners go to our CONSOLIDATED program).

-As we said at the beginning of this post, it is preferable to do this exercise on a smith machine so that you can focus more on chest stimulation rather than worrying about having the weights slip and land directly on your neck; LIKE A REAL GUILLOTINE!
But to be honest I often end up doing this move on a regular bench press. I only use light weight then I superset it to regular bench once I reach failure with the guillotine position.

-Again, use lighter weights and make sure that you do this move “slowly” to surely focus on the time under tension. Get at least 3 seconds on your negative portion of the move.

-I would do guillotines by the midpoint of my chest training. I would do the main regular press at the beginning since guillotines would require high reps and lighter weights.

My final verdict on the neck/guillotine presses is that it is indeed a great workout for chest stimulation and for shocking a lagging chest. But one must do special care on their form and really concentrate on chest tension al throughout the move. The Guillotines are not recommended for beginners as they would lack the foundations in the first place. Eat your eggs people!