While many gym rats consider the bench press the true test of a lifter’s upper body strength, another pressing exercise commonly competes with the mighty bench for top spot. The Overhead Shoulder Press – whether seated or standing – is a powerful exercise. It works the shoulders, arms, chest, core, and even the legs to drive the weight into the air. Some of the greatest shoulders in bodybuilding and strength sports have been built with this classic staple. But while the Overhead Press has remained relatively popular at the gym, a great variation is all but neglected: the Bradford Press.

I talked a little about the Bradford Press in a post on my blog, but felt the move deserved an article of its own. Invented by Jim Bradford – a weightlifting legend who won silver at the 1952 and 1960 Olympics, as well as four world championship events – the Bradford Press is an excellent move to target each head of the deltoids. But it’s not a move you see many people in the gym doing. Don’t get me wrong, I absolutely love the Overhead Press. Side Laterals are another favorite, and an exercise I see plenty of folks doing. But if you’re looking for something to add another dimension to your shoulder workouts, then the Bradford Press is exactly what you need.

The Bradford Press starts in the same beginning position as the standard Overhead Press (or Military Press). Press the barbell upward, then move back in an arc until the bar is behind your head, and slowly lower the weight. The bar should come down about level with your ears – no lower – to avoid injuring your rotator cuff. Then press up again, moving the bar back over your head, and lower to the starting position at the chest. This entire move constitutes one rep. The weight should be controlled throughout the exercise, with an even tempo on each portion of the rep.

The first and most obvious benefit of the Bradford Press is the way it trains the rear delts as well as the front, since many lifters tend to focus on moves that build up the front delts. Even the Overhead Press is somewhat dominated by the front delts – especially if you’re pressing with bad form. As I –and the Ironthumb – have said on many occasions, muscle imbalances can not only ruin your aesthetics, they can also lead to injury over time. Keeping your entire shoulder, not just your front delts, healthy and strong will keep you in the gym making progress. The Bradford Press is perfect for working the entire shoulder and even increasing shoulder mobility.

A second benefit of the Bradford Press is the intensity in the exercise itself. If you add this exercise to your routine, expect your shoulders to be pumped like never before. The barbell should be moving continuously throughout the Bradford Press, with no lock-out at the top. This means you should feel a non-stop burn in your muscles, with fatigue setting in after just a few reps. Because of this, you’ll want to go considerably lighter than on the standard Overhead Press. Focus on form, and really feel your shoulders contracting. I like to stay in the 12-15 rep range for this exercise, but I encourage you to experiment with it and see how it works for you. 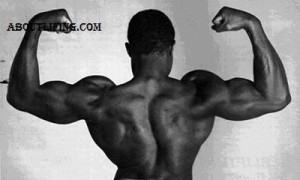 Now that we know what a great exercise the Bradford Press is, how can we work it into our routine? If you train shoulders in one heavy workout once a week, you can use the Bradford as a burn-out set at the end of your Overhead Press. Or you could do a couple sets as a warm-up before the heavier OHP. If – like me – you usually train shoulders twice a week, with a dedicated Shoulder Day earlier in the week and a few sets on Arm Day, you can use the Bradford Press as the main lift of your second workout. You could even alternate between the standard OHP and the Bradford from one week to the next.

However you choose to use it, the Bradford Press should be considered an important part of your shoulder training. Whether you decide to use it regularly, or just when your deltoids seem to need that extra kick, it’s a solid addition to the venerable Overhead Press family. I would caution that you start out carefully, and with an easy weight. This is particularly true if you have shoulder issues. However great an exercise may be, it’s not worth an injury if you’re not ready to do it.

If you have any comments or questions about the Bradford Press, you can leave them below. Ironthumb or I will do our best to get back with you. And, if you enjoyed this article, you can subscribe for even more great content from Aboutlifting. Also, be sure to check out my website, at www.BuildingYouBetter.com for more information on how you can train like a hero.