I used to do a whole lot of preacher curls back in my early lifting days. It was a part of the arms day program that Jet’s (the first gym that I went to) in-house gym instructor recommended, who was a friend of mine by the way and he didn’t charge me a dime. My program would look like this:

Fast forward to the present as About Lifting readers we could tell that the above program is quite an over-kill. These days we could settle with a maximum of 3 well executed exercises for biceps, since there is really not much that you could do and it’s really a small muscle group anyways and more exercises could even become counter-productive.

(Check out this post if your arms just won’t grow)

Today I even recommend doing only the most important whole body moves and only a little bicep and triceps work as a supplemental addition to squats, deadlifts, and barbell presses of any kind. Usually two moves would suffice. For that reason I had to select only the best of the best of these and one of the moves that have suffered the process of elimination for me personally was the preacher curls.

These days I would just do spider curls instead of the preacher curls. The reason for that is I really don’t feel much muscle activation with the preacher curls, especially the one where you use just one dumbbell per arm. Yes! You could use a ton of weight on preachers (since you are assisted by the bench), but it actually doesn’t feel like it does the biceps any good.

One thing that I like about the spider curl is that it is the complete opposite of the preacher curl; where instead of putting your elbows at an angle, it puts your body at an angle and your elbows 100% straight therefore giving your biceps a greater range of motion. The preacher curls however do not, not at least according to my personal preference.

For those of you who dont know what is a preacher curl, here it is, one on the left is Arnold doing Preacher curls: 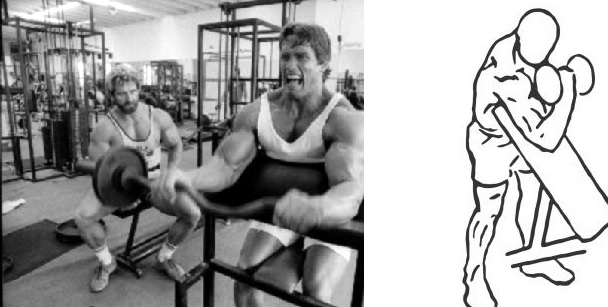 But science seems to agree with me on this. Hey, thanks Science! Look here; some hard-core sports scientists conducted a study on this on Federal University of Rio de Janeiro, Brazil. They selected 22 male weight-trained subjects (doing resistance training for at least a year), so not to skew the results by getting totally inexperienced newbs. These men were made to perform three different types of curls (not the curls for hair!). Electrodes were attached to their biceps to measure how hard the biceps worked with each exercise.

These were the exercises: 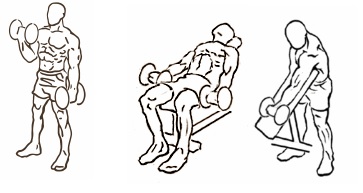 1,2, and 3 in respective order from left to right in the picture above

They found that the incline curl and the standard curls have the same effectiveness. The preacher curl however, didn’t deliver too well since it loses out in the third concentric phase of the movement and involves a shorter range of movement than the other versions.

Incline Dumbbell Curl (IDC) and Dumbbell Preacher Curl (DPC) are two variations of the standard Dumbbell Biceps Curl (DBC), generally applied to optimize biceps brachii contribution for elbow flexion by fixing shoulder at a specific angle. The aim of this study is to identify changes in the neuromuscular activity of biceps brachii long head for IDC, DPC and DBC exercises, by taking into account the changes in load moment arm and muscle length elicited by each dumbbell curl protocol. A single cycle (concentric-eccentric) of DBC, IDC and DPC, was applied to 22 subjects using a submaximal load of 40% estimated from an isometric MVC test. The neuromuscular activity of biceps brachii long head was compared by further partitioning each contraction into three phases, according to individual elbow joint range of motion. Although all protocols elicited a considerable level of activation of the biceps brachii muscle (at least 50% of maximum RMS), the contribution of this muscle for elbow flexion/extension varied among exercises. The submaximal elbow flexion (concentric) elicited neuro muscular activity up to 95% of the maximum RMS value during the final phase of IDC and DBC and 80% for DPC at the beginning of the movement. All exercises showed significant less muscle activity for the elbow extension (eccentric). The Incline Dumbbell Curl and the classical Dumbbell Biceps Curl resulted in similar patterns of biceps brachii activation for the whole range of motion, whereas Dumbbell Preacher Curl elicited high muscle activation only for a short range of elbow joint angle. Key points: The Incline Dumbbell Curl and the Dumbbell Biceps Curl resulted in a considerable neuromuscular effort throughout the whole elbow range of motion. The Incline Dumbbell Curl and the Dumbbell Biceps Curl may be preferable for the improvement of biceps brachii force in training programs.

So there you go! Enough proof that old school bicep moves are best. Preacher curls could still do you good done only once in a while to break the monotony. I guess for now the only use of the preacher bench for me would be for doing “spider curls” which isn’t on this research but is still very effective and I dare one say otherwise! Till next time! Eat your eggs, and do your CURLS! PEOPLE!!

The Weak Die YOUNG, Strong LIFTERS Live to Become OLD FARTS - That's What Science Says
What’s The Best Lifting Tempo to Use in Your Reps