This is the story of the typical you – You will start out young, proud and alert. You have always been sharp; you never forget stuff. When your parents told you not to forget to take out the trash before going out; you did– BUT you were just pretending so that doesn’t count.

At high school you always forget the lectures but not because you were forgetful – but because you were too busy playing games, partying and fooling around and never really had a chance to review. BUT that’s okay! You passed anyways because your professor allowed you to take a special project, and you flirted with your young, hot history teacher (ironic). Furthermore your solid circle of buddies never failed to share answer keys for examinations and off course that came from the geek squad who were helping you out in exchange of fist bumping with them in public. That was way back in your teens – YOU WERE ONE SMART MOTHERFUCCA!

In your twenties you were still quite slick. You always forget anniversaries and birthdays of your special someone. BUT that was because there were TOO MANY of them. I mean – come on! Give me a break! How is someone supposed to remember all of those dates from several different chicks? But you were smart enough to manage to keep them away from each other and plan your schedules with each and every one of them and avoid drama (at least most of the time) – GENIOUS BASTARD!

On your late twenties and thirties though, things started to get a little fuzzy. You already had your shit together but somehow you seem to always lose stuff – you know; small stuff, no biggie.

Sometimes you forget where you put your 20 bucks; sometimes it’s your phone. But it gets a little too difficult whenever you forgot where you placed the damn car keys! And looking back, that actually happened to you quite a LOT!

Fast forward into your late 40s – life is starting to get difficult. You are not as sharp as you were anymore but that’s okay – since you cannot even remember how sharp you used to be in the first place.

Now you are forgetting things more and more often. It’s now getting too much for you to handle so you decide to consult your doctor about it. He tells you that you are suffering from beginning stages of “Neurodegeneration”. Suddenly your doctor recommends that you eat a healthy diet, live a healthy lifestyle, and exercise. But you never lifted weights your entire life. Well, that might be the reason why you are like that right now. 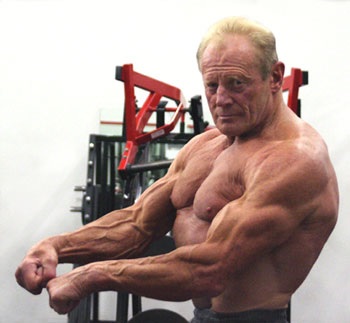 Dear A-Lifters, I know that you know that lifting weights can WILL make you smart; but recent studies is now discovering the specifics and that it actually helps your body secrete a certain substance that directly helps your brain cells.

This substance is called Brain-derived neurotrophic factor or BDNF for short:

BDNF acts on certain neurons of the central nervous system and the peripheral nervous system, helping to support the survival of existing neurons, and encourage the growth and differentiation of new neurons and synapses.[5][6] In the brain, it is active in the hippocampus, cortex, and basal forebrain—areas vital to learning, memory, and higher thinking.[7] It is also expressed in the retina, motor neurons, the kidneys, saliva, and the prostate.[8]

BDNF itself is important for long-term memory.[9] Although the vast majority of neurons in the mammalian brain are formed prenatally, parts of the adult brain retain the ability to grow new neurons from neural stem cells in a process known as neurogenesis. Neurotrophins are chemicals that help to stimulate and control neurogenesis, BDNF being one of the most active.[10][11][12] Mice born without the ability to make BDNF suffer developmental defects in the brain and sensory nervous system, and usually die soon after birth, suggesting that BDNF plays an important role in normal neural development.[13] Other important neurotrophins structurally related to BDNF include NT-3, NT-4, and NGF.

BDNF is made in the endoplasmic reticulum and secreted from dense-core vesicles. It binds carboxypeptidase E (CPE), and the disruption of this binding has been proposed to cause the loss of sorting of BDNF into dense-core vesicles. The phenotype for BDNF knockout mice can be severe, including postnatal lethality. Other traits include sensory neuron losses that affect coordination, balance, hearing, taste, and breathing. Knockout mice also exhibit cerebellar abnormalities and an increase in the number of sympathetic neurons.[14]

Certain types of physical exercise have been shown to markedly (threefold) increase BDNF synthesis in the human brain, a phenomenon which is partly responsible for exercise-induced neurogenesis and improvements in cognitive function.[15][16][17][18] Niacin appears to upregulate BDNF and tropomyosin receptor kinase B (TrkB) expression as well.[19]

You see, this goes deep. Studies now show that myokines released by exercising muscles affect the expression of brain-derived neurotrophic factor synthesis in the dentate gyrus of the hippocampus, a finding that could lead to the identification of new and therapeutically important mediating factors. (source)

Here’s an abstract of the research I want to share with you:

Abstract
Brain derived neurotrophic factor (BDNF) is postulated to be an important mediator of exercise-induced neuroprotection. We tested the hypothesis that resistance exercise elevates circulating BDNF. Twenty healthy untrained college-aged males underwent a 5-week traditional or eccentric-enhanced progressive resistance training intervention. Blood was acquired at rest and 1, 30, and 60min following a standardized resistance exercise testing bout performed at baseline and at the completion of the intervention. Serum BDNF responses did not differ between the two groups at any time point during baseline or post-intervention testing; thus, all values were combined into a single cohort for further analysis. Resting BDNF was not altered by the exercise training intervention [23,304+/-1835pg/ml (baseline) vs. 19,433+/-1992pg/ml (post-intervention)]. Following the baseline resistance exercise bout, serum BDNF increased 32% (p<0.05) and was gradually reduced to 41% below resting levels at 60min into recovery (p<0.01). During post-intervention testing, serum BDNF increased 77% in response to the standardized resistance exercise bout (p<0.01) and returned to resting values within 30min. Ultimately, the change in serum BDNF from rest to immediately post-exercise was 98% greater at post-intervention than at baseline (p<0.05). Our study is the first to demonstrate that resistance exercise induces a robust, yet transient, elevation of circulating BDNF and that progressive resistance training augments this response; perhaps demonstrating one mechanism through which exercise influences brain health.
Published by Elsevier Ireland Ltd.

Resistance Training is a LITERALTherapy Session for your BRAIN

Ever wondered why you feel so calm and serene after a very intense training session? That is because of these good chemicals being secreted by your body that directly massages your brain. We can say now for sure that each and every intense bout in the gym not only helps your muscles develop but also equates to an hour of therapy session for your brain.

BDNF not only helps protect existing brain cells but also stimulates generation of new ones. This is very crucial in helping people avoid brain degeneration and steer away from Alzheimer’s, Parkinson’s, etc. Retired boxers who suffered from continuous head trauma from their career should be better served lifting weights regularly during retirement (to death).

BDNF also helps in getting rid of depression that is why you suicidal people out there should definitely be LIFTING WEIGHTS and quit being attention whores!stud

Old people should also lift weights if they want to keep their sanity as long as they live. Just to make a point, do you notice any difference talking to old farts who are obviously physically active and those old people who are obviously sedentary? The former usually talk like young men even at old age and still contain that “robustness” while the latter would take five minutes to say a single statement and will usually forget your name or what you were talking about in the midst of your conversation.

Do you want to be like that? The good news is that it’s not too late. If you are approaching old age you can still start doing some physical activity – it will definitely help in keeping your mind “young” and alert. But to you young people who are reading this (this includes people who are still only in their 40s or 50s), consider yourself lucky. But do not dare WASTE this knowledge and get back to becoming a couch potato, get off your lazy ass and

I recommend doing some 30 minutes of intense resistance training at least 3 times a week.

What do you think? Please share what’s on your mind (while it’s young) on the comments section. If you know someone who could use this info, please do his “brain” a favor and share with him/her this article. Eat your eggs, people!