For some reason we now live at a day and age filled with anxious, crazy, batsh¡t, crazy people; everyone seems to be having his own “attacks” every so often. On the streets you would see diazepams and tablets gulped down like candies, things that would be so foreign other parts of the globe. Kids now have ADHD, frustrated kids shoot campuses, young adults getting panic attacks; I mean what the hell is going on?

One day at work, I saw some middle aged woman. I noticed that her ID lace belongs to the company I used to work with. So I asked her in a very enthusiastic tone “hey, you worked for X company? Cool”, and she replied to me in a very aggressive tone “yeah, so what!” Now that is not a normal response from a normal person (at least not the like the ones I always get from people). She must be a very “unhappy” individual suffering from chronic depression, which is sad. But is it any surprise at all that people these days would suffer from those kinds of things?

We are like cars fueled with used oil instead of fuel

To understand further, let us reflect what a typical Joe does on a day to day basis. You are probably living as an employee, working on a desk job 9 to 5 (6 if you will take an hour of lunch).

7 am you wake up to the sound of an annoying alarm. Afterwards, you take a shower, and then you have some toasted wheat bread or microwave something from the fridge (you have to move fast). At 8 you drive to work, get caught in the regular traffic jam like regular people, scream at the guy from the next car, etc then you arrive to your parking space, which is already taken so you look for another while cursing on your own, thankfully you will be able to stamp the clock at the nick of time. Now you sit in your desk from 8 until your designated coffee breaks where you will do nothing but either smoke, waste time, or tinker around with your gadget. Then what is left is to deal with your difficult boss, eat lunch on a fast-food with their genetically modified, chemical-ridden, factory made specialty dishes. Then after your sentence for the day is over you stamp out from the clock, fight the traffic jam again (like always), then eat your Mcdonalds dinner, reach home take your sleeping pills. Come, rinse, wash, and repeat.

So, it would indeed be a surprise for someone living like that not to suffer from several inflammatory illnesses, chronic anxiety and depression.

Your average hoodlum thug would at least get regular exercise in form of running when they pickpocket or when they fight the police, or beat you up for your money. But the regular working-class Joe would have no luck at all and it doesn’t help that people are just naturally too lazy to begin with.

That is the reason why the medical industry is making so much money, especially pharmaceutical companies who really love to shove down medications down our throats. With that type of system going on, why would they want to remove the things about humanity that are making people sicker and sadder? At least we live through these poisons just enough so that they can benefit from our regular spending on medication, and that is also the reason why your doctor would not think twice about prescribing Anxiolytics and anti-depressants even before they could rule out that they were just caused by a corrupted lifestyle.

If everyone would undergo lifestyle modifications (for the healthier) these companies would be out of business in no time!! 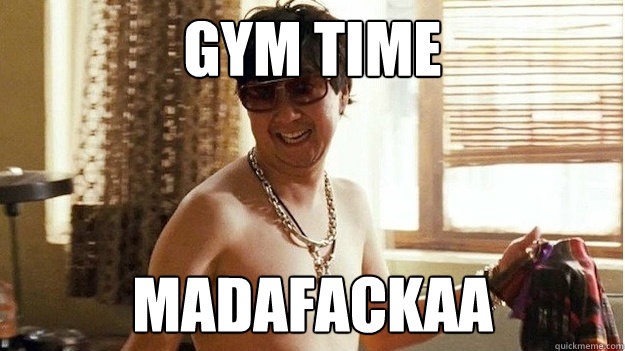 Sorry, about that; Mr. Chow just had a little too much , you know…coke! And he has just missed a couple of his Diazepams; but he’s right – IT’S TIME FOR YOU TO GO TO THE GYM!!!! Why is that? See below:

Because the good news is that lifting weights has actually been proven by to eliminate or at least help with anxiety and depression:

To examine whether regular exercise is associated with anxiety, depression and personality in a large population-based sample as a function of gender and age.

The sample consisted of adolescent and adult twins and their families (N = 19,288) who participated in the study on lifestyle and health from The Netherlands Twin Registry (1991–2002). Exercise participation, anxiety, depression and personality were assessed with self-report questionnaires.

The overall prevalence of exercise participation (with a minimum of 60 min weekly at 4 METs (Metabolic Energy Expenditure Index)) in our sample was 51.4%. Exercise participation strongly declined with age from about 70% in young adolescents to 30% in older adults. Among adolescents, males exercised more, whereas, among older adults, females exercised more. Exercisers were on average less anxious (−0.18 SD), depressed (−0.29 SD) and neurotic (−0.14 SD), more extraverted (+0.32 SD) and were higher in dimensions of sensation seeking (from +0.25 SD to +0.47 SD) than non-exercisers. These differences were modest in size, but very consistent across gender and age.

This study corroborates and extends previous findings: regular exercise is cross-sectionally associated with lower neuroticism, anxiety and depression and higher extraversion and sensation seeking in the population.

So for the good of all humanity (lest you become the next crazy, depressed, nutjob to headshot an entire campus full of kids), and for your own sanity – take time from you usual “busy” days to eat some real food and lift some “real” weights. We have provided several workout regimens and most of them have been designed to last for NO more than an hour so you can go back to your boring, depressing, chemical-filled life again in no time afterwards. Eat your eggs, people!